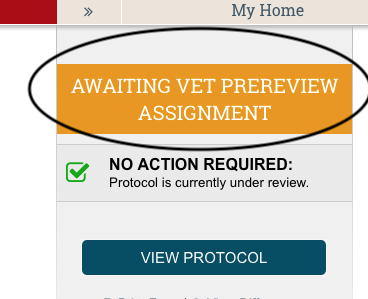 Here's a key to interpreting states:

Definitions for states when PI has control of the protocol
Pre-submission: PI has not yet submitted the protocol for vet prereview or IACUC review

Under Revision for Follow-up Vet Prereview: PI has received vet's concerns from prereview. Once the PI addresses concerns, he/she can resubmit it to the assigned vet prereviewer

Under Revision by PI: PI has received committee concerns after review. Once the PI addresses concerns he/she can resubmit it to the IACUC

Withdrawn: protocol was removed from the review process or active state and is archived

Definitions for states when RARC/IACUC committee has control of the protocol
Awaiting Vet Prereview Assignment: PI submitted the protocol. Now the RARC protocol manager will assign it to vet prereview

Awaiting Review Track Assignment: PI submitted the protocol/rewrite for IACUC review. Now the RARC protocol manager will assign it to either designated or full-meeting review

DR Balloting: IACUC members are voting on whether the protocol should have a designated or full-meeting review

DR Balloting Time Out: balloting period is over

Designated/Rewrite Review: protocol/rewrite previously approved for DR is under review

Pending Required Responses: protocol/rewrite is being reviewed by a designated safety person

Assigned Meeting Review: RARC protocol managers will assign the protocol to a meeting

Pending ACUC meeting: protocol has been assigned to a future IACUC meeting

Motion Continue Suspend: IACUC continued its suspension of a protocol reviewed at a meeting

Motion Continue Suspend and Request Amendment: IACUC continued its suspension of a protocol reviewed at a meeting and requires the PI to submit an amendment

Terminated: protocol is terminated and archived

Assigned Review by Vet: RARC protocol manager assigns the protocol to a vet for rewrite review

Pending Rewrite Review by Vet: protocol/rewrite is being reviewed by a designated safety person

Review by Vet: vet is reviewing the rewrite

Active: the protocol is approved

Suspended: IACUC has suspended the protocol; no research may be performed under it